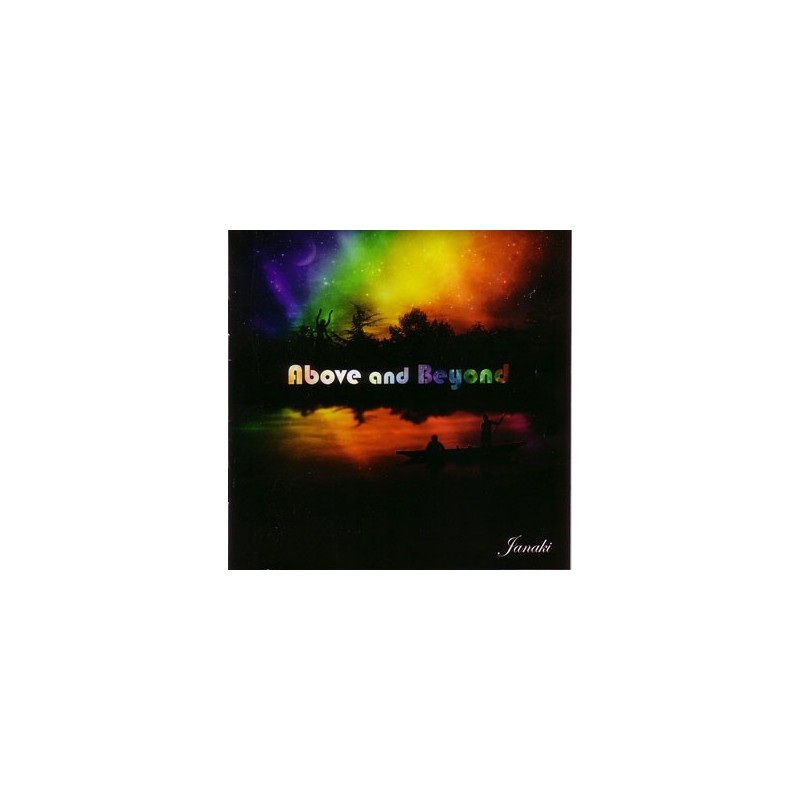 Above and Beyond (Janaki)

This is an amazing achievement in Janaki's life... well done and congrats! A wonderful Album

At the tender age of 11 jak got her first guitar, saved up from pocket money given by her mum and brother. She had hardly unwrapped it when she began writing her first song…. Her first song was about God:

Sitting in the sun

Waiting for the Lord to come

I’m pretty sure you’re there

Jak was obsessed by and hooked on making music….

At 16, she persuaded her mum to let her join an All-Girl Band, where they needed a bass player/backing singer, so she learnt as she went along, on the first couple of gigs they just turned off the amp ! They loved her enthusiasm and dedication and soon enough she was playing the right notes, and one memorable night she switched ON the amp and took a bass solo! All the band were wide mouthed, but very happy.

And then one night, the worse thing ever happened to her, the lead vocalist didn’t turn up and the band leader asked her to sing lead, it was one of her worst nightmares to be asked to front the band, she was shy, scared and lacked confidence, but also she had never ever thought of being a singer, all she wanted was to be a songwriter.

The band leader put the pressure on, reminded her that she knew all the songs from rehearsals and that they would lose this regular, well paid gig if she didn’t sing…. Oh Help! “It was one of the bravest and scariest things i had done up to that point in my life” she says, but, “I did it, I went for it, I absolutely loved it and so did everyone else, so much that they suggested the lead singer leave!

Dilemma! The lead singer was my friend so I suggested we share the lead vocals, sorted. And I was now a singer/songwriter.”

As a day job, Jak worked for the BBC as a print department supervisor for four years from the age of 17. But she only worked for about two years, the other two years she was off “sick” playing music! Eventually her boss at the BBC told her it was either her print job or the music. She chose the music, much to his approval, and left the BBC.

In YYYY she was signed to CBS for five years and did a great cover version of the song “ Volare”, as her first single. Under the name of Explosivo which was much raved about and especially by Kenny Everett who loved it and played it for two weeks as his favourite track. Jak also recorded a jingle version of it for Capital Radio.

After the success of her first single, CBS asked for a second, so she with her production team went and recorded Iko Iko. .Now, this is where it could get into a very long story.. the short one is —- the belle stars manager bought out her contract from CBS, chucked it in the bin and his group went on to have a number one hit with Iko Iko !!

Jak went home and said to her family “oh well, it’s not meant to be this time “and got on with her writing and recording. Jak saw it as her karma. She was then approached by Stiff records, which was a very very cool label at the time and did the single “Boys have feelings too “, there was some TV coverage of the single but not enough promotion and then sadly the record label folded….. “oh well, pick yourself up and carry on,” was the mood again. Jak was then asked by an independent label “petcode records” to sign with them, she did and now she was recording her own material, they promised fame and fortune……… again, not to be, “oh well, ….. now I think it’s time to get my own studio set up and make my own recordings”

All through these times Jak had been gigging in different bands and learning her trade. Her spiritual quest really began in earnest in 1987 when she found Bhagavad-Gita in Miami airport with her name in it the way she signed it

“Jaki x”. Miami airport is huge – almost a mile long – and she saw the book at a distance in the middle of nowhere. She picked it up and, reading her name inside, looked up and said, “Thanks a lot!” After that, every day she would walk around her neighbourhood and would say, “I’m going to find you!” to God. It became such a theme in her life that when she returned home her friends would say, “Have you found God yet?”

After meeting the Hare Krishnas Jak started putting a picture of Srila Prabhupada on her amplifier. At the end of every gig she would get the audience to sing “The Wonder of You” by Elvis Presley to the picture of Srila Prabhupada. They were a little drunk and merry, but they got into it… However, during this time, the music business started becoming more and more distasteful and she decided to give it up and dedicate her life to Krishna. After a few years her mother became sick and Jak became her carer for around 12 years. During this time she continued recording and writing. She also produced and recorded for others.

After her mother passed away, Jak had to face, more or less for the first time, the prospect of getting a full time, so called “proper job ” At 50 years old this was a daunting prospect. She didn’t want to go back to the music business, and anyway she had lost touch with the music world. So, she got a job in a local pharmacy and used any spare money she had from the job to fund her album, Above and Beyond. It was going very well, being almost half finished, when she was diagnosed with Stomach cancer.

Jak’s story is not finished…… and nor is Jak, Above and Beyond has given her a new lease on life.